Holy Javascript Libraries, Batman! In case you’re keeping score, Adobe began shipping Dreamweaver CS5.5 less than two weeks ago with support for jQuery and jQuery Mobile. But, the versions included in Dreamweaver, jQuery 1.5 and jQuery Mobile 1.0a3, are already out of date! Because before you could even get your copy installed, the jQuery team released a significant upgrade to the core jQuery library – version 1.6. Along the way, the jQuery Mobile framework has also been updated to version 1.0a4, which includes several important bug fixes. So, if you are a Dreamweaver user and you want to develop jQuery Mobile sites and applications with these updated versions of the libraries, what are you supposed to do? Update your libraries, of course… here’s how…

Before proceeding, you’ll obviously want to go grab the updated libraries themselves. For the core jQuery library, I suggest using the minified version. Because images are also part of jQuery Mobile, I recommend grabbing the zipped version of the framework. After you download and unzip the folder, you’ll find a full version of the css and js files. I recommend using the minified versions, so go ahead and delete the full versions of the files (ie, they don’t have “.min” in their names). 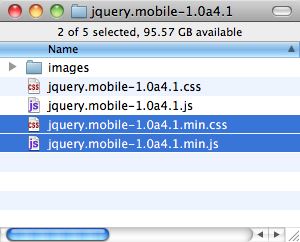 Arguably one of the most powerful features of Dreamweaver is its extensibility. In fact, the application itself is built around the very technologies that it itself writes, namely HTML, CSS and Javascript. All of these pieces are located in the Configuration folder that you can find where Dreamweaver is installed on your computer. For me, since I’m a Mac user, it’s at Applications>Adobe Dreamweaver CS5.5>Configuration. There are tons of other folders in the Configuration folder, but the one that holds the files that we are interested in is the Third Party Source Code folder. 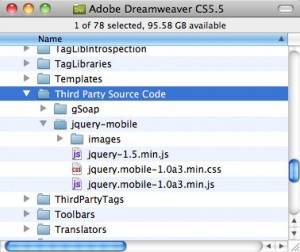 Inside this folder, you’ll find the jquery-mobile folder. If you want to backup the folder, feel free. None of the sites that you have worked on previously are reliant on these files, as Dreamweaver makes a local copy in each site you create (if you are not using the CDN versions of the Mobile Starter Pages – which we will talk about later). Replace the two jquery-mobile files (css and js) with your newly downloaded files. Replace the entire images folder as well. Finally, replace the jquery-1.5.min.js file with your jquery-1.6.1.min.js file (or whatever you named it).

One last step and your update is complete. When you choose to create a new file from the New Document dialog, Dreamweaver makes a copy of the selected file from the Configuration folder and places it in your site file. The Mobile Starter layouts (New Document > Page from Sample > Mobile Starters) are located in Configuration > BuiltIn > Mobile Starters. There are 3 pages – two of which reference the files that you have now deleted, jQueryMobileLocalMultiPage.htm and jQueryMobilePhoneGapMultiPage.htm.

Open each of these files in Dreamweaver. You’ll see in the head of the document links to the two old jQuery Javascript files and the old CSS file. Simply update these links to point to your new files and save the document. Test that everything worked properly by closing the file, then creating a new page from the Sample that you just changed. Make sure to save the file into a site to make sure that Dreamweaver copies the proper files into the site.

Finally, if you want to change the CDN version, it points to the jquery repository online, simply update jQueryMobileMultiPage.htm to point to the location of the CDN versions of the files.

45 Responses to “Updating jQuery and jQuery Mobile in Dreamweaver CS5.5”