At the risk of offending some, and as a follow-on to my previous post… Stephanie and I were just discussing the topic of Twitter followers and the significance attributed to the number of followers one has. In fact, the Washington Post posted an article about the same thing.

As suggested in the Post’s article, some people (such as Guy Kawasaki) seem to think that a measure of a person’s worth is the number of followers they have. But with all due respect to Guy, Ashton, and probably Oprah herself very soon, for me and many of the people that I know, Twitter is about something much different. I think it needs to be understood that some of us use Twitter to keep in touch and communicate with people that we actually know (or, at least, pretend to know – in the virtual sense).

In the “olden days” we wrote letters to the people “in our circle of friends/family” – remember dreading the Christmas card ritual every year? Then along came the web and we began to email the aforementioned circle – and we expanded it to include those which wouldn’t have gotten a Christmas card, but with whom we had a cursory relationship. We would “touch base” every so often – but most importantly, no longer just at holidays. Instant Messaging moved the needle again – but rarely would I share my IM name with someone that I had just met at a tradeshow or conference. With Twitter, the game changed completely. As a case in point, I literally just saw a billboard on the side of the highway with NO web address! Instead it simply stated that you could contact the company “@TheCompany’sNameWasHere”.

The fact that Twitter allows literally anyone to follow my every 140 characters (unless I protect my updates which seems to defeat the purpose of Twitter), means that I regularly awake to find that I have gained 10, 20, 30 or more followers while I slept. (I hope they didn’t hear me snoring…!)

Therefore, when I get a new follower, I routinely check their “stream”. The first thing that I do is look at how many followers they have, and how many they follow – as well as to read their Bio. If you’re in my industry (web design/development, web standards, Ajax), I’ll probably follow you back. If I’ve met you in person, or you are someone who “knows someone that I know”, you’re probably gonna be on my follow list. And finally, even if I don’t know you, you’re not in my “circle”, but you’re hilarious – you’ll definitely get a follow. (I’d send a shout-out to several of those that I follow for that reason, but they might be embarrased…). However, if you are up in the thousands (in terms of people you follow), it’s VERY unlikely that I will follow you back. Why? Because you won’t ever see/hear me.

For me, Twitter is about my friends/acquaintances. The list of people that I follow is a list of the people that I would like to invite to a special party or event – or that I, at the very least, have a professional connection with. They may not be my “best” friends or closest colleagues, but they are significant enough in my world that I actually want to hear how their day went or what their significant other did, or what the dog decided to chew on today. That’s not to say that I “don’t care” if I don’t follow you back. It’s just that I want to make sure that I can hear what my “friends” have to say – and anyone following more than 500 people can’t tell me that that is possible (unless they have people who tweet for them – like Guy). 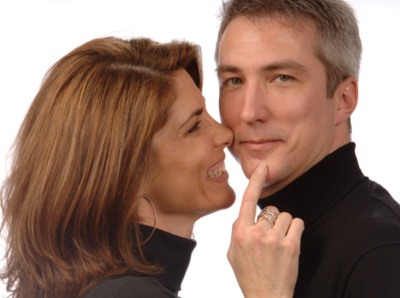 As you probably have seen over the last several months, there has been a dramatic increase in the “awareness” of social media outside of the core “geek” crowd. In fact, Twitter has become so mainstream that the likes of CNN and Ashton Kutcher are battling to become the first Twitterer to reach 1 million followers. Other celebrities have been quick to jump on the bandwagon as well. I even had the pleasure of being at the first Tweet-up for fans of a sports team when the Phoenix Suns got a bunch of us together for a game and some after-game socializing which culminated in the “surprise” appearance of Shaq, aka @The_Real_Shaq. My fiance, Stephanie, and my son, Noah, got lucky enough to even get a picture with him.

On Friday, April 17th, Twitter will go even more mainstream. At 4pm EST, the one and only Oprah Winfrey will enter the Twitterverse (although as of this writing, she already has 56000+ followers without even having posted a single Tweet). I’m sure you’re asking yourself “Greg, do you actually watch Oprah…?!” Well, no. Although I have been known to have it on “in the background” while working in a hotel room.

The excitement surrounding Oprah’s interest in Twitter is much more narcissistic. While going about our day today, Stephanie and I received an email from one of Oprah’s producers. Apparently in doing their research for the show, they came across my Twitter proposal – which has now been acknowledged as the “first Twitter proposal“. According to the producer, we’ll be mentioned toward the end of the show – they’ve asked our permission to republish our Twitter exchange as well as to show a picture of us on-air. Too cool!

We’ll have our Tivo set – but if you stumble across the piece on YouTube, be sure to let me know! Who knows, maybe we’ll have to put Oprah on the wedding invite list for this summer! Cheers!

Whether or not you like the movie, the website for the fourth Fast & Furious is way cool! Of course every movie has a microsite these days, but what makes this one even more special is that Creative Suite 4 was involved in the entire production of the site and ad banners, as well as the creation of the AIR-based desktop application and an iPhone application. Of course there’s tons of video on the site, that was treated by After Effects CS4 and encoded for delivery via Flash – and the new 3D capabilities in Flash Professional CS4 really shine in the site’s navigation. What I loved seeing most, though, is that the website was optimized for the iPhone using Dreamweaver CS4!

Of course, you’ve heard all of us from Adobe talking about the time-savings that CS4 users benefit from – and this project is a real testimonial to that. In fact, if you want to read more about the project and what products were used, we’ve just posted a case study on the Adobe web site.