Along with everything else that is going on on the ninth day of the ninth month of the ninth year of this millennium, my colleagues on the Adobe TV team have launched their completely redesigned site. 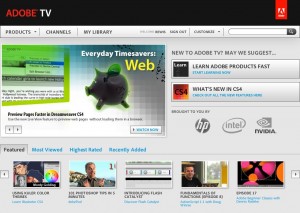 The initial version of Adobe TV was launched about 18 months ago. And while it accomplished its mission to provide a single point on the web for learning about Adobe products, it was quite honestly a mess due to a hastily thrown-together backend and an even worse user experience. Ironically, I’m almost sad to see the old site go, as I used to use it as an example of what NOT to do on the web – namely build an entire site in Flash/Flex. Don’t get me wrong, I love Flash and have no problem with Flash content – especially video. There are only very limited examples of using Flash/Flex to build an entire public facing site and doing it right – so limited in fact that I can’t even think of any.

I was very vocal internally about the need to improve the user experience of Adobe TV, as well as to do it without sacrificing web standards. And to their credit, Bob Donlon (the man behind the curtain) accepted the constructive criticism from not only myself, but more importantly from our end-users. Bob took his team back to the drawing board and rebuilt the site from the ground up. In fact, only the original opening and closing <html> tags are left from the old site! :-) The site is now built entirely in HTML, with CSS providing the presentation and Javascript implementing the behaviors (they used jQuery as the framework). Of course the video content itself is still delivered via Flash – as well it should be, being that Flash is the most widely adopted video format on the web.

The team has not only made it easy to search (and actually find) content. They’ve implemented working ratings systems, added the ability to easily share videos on social networks and provided end-users with the ability to completely customize the content that they see on the front page of the site. All around, this is an amazing redesign. So, congratulations to the entire Adobe TV team on a job well done! 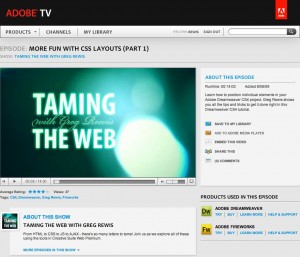 And while I’m at it, how about a gratuitous plug… Be sure to check out my series, Taming the Web – we’re about half way through this season’s 18 episodes. New shows are released every two weeks. Click on the Subscribe link on the show’s main page to automatically be notified when new shows arrive.