Friday has to be the best workday of the week, not only for the obvious weekend reason, but also because it seems to bring out the silliness in not only myself, but my fellow colleagues. Earlier this morning I received an email announcing the fact that one of my Evangelist colleagues, Serge Jespers, had created a widget badge to help promote our upcoming Adobe MAX Conference in Los Angeles.

To make the widget much more fun and engaging than your standard, run-of-the-mill promotional badge, Serge’s widget not only includes the ability to hear/see attendees of past MAX conferences talk about their reason for attending, you can record your own testimonal right in the widget. Serge also integrated the ability to share the widget in the major social networks, as well as add it to your own site – although I did pick on Serge a bit because the widget is too big to put in my sidebars. He’ll hopefully feel enough peer pressure to make one that fits in the 240 pixels that I have available… :-)

The main screen of the widget cycles through random facts about past MAX conferences. And I have to admit, the range of facts is actually quite impressive – from the fact that the largest Flash-enabled device is a yacht, to the fact that over 10000 slices of pizza were consumed at last year’s event. Apparently we’ve been keeping some great statistics about the goings-on at MAX over the years. You can even hit a button to tweet the displayed fact.

And just as I was about to post this, the infamous Ben Forta emailed me a screenshot of the funniest of all the facts – at least for me: 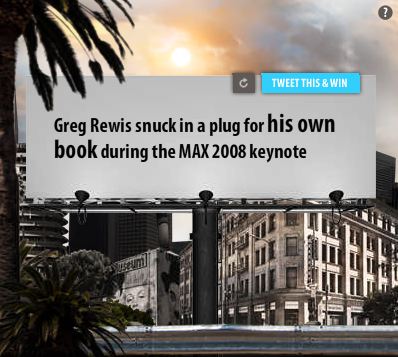 And yes, it’s true, I did! Too bad I don’t have a new book to plug in this year’s keynote… that is of course, IF Ben is going to let me be in the keynote again!

Make sure to register now – that way you’ll not only find out if Ben let me on stage, you’ll also save yourself some money as the Early Bird pricing ends on August 31st.

One Response to “Bet You Didn’t Know…
Fun MAX Facts”