Tossed in the garbage under Adobe, Travel

There really are those moments in life, and more specifically in your professional life, when you really, really know why you do what you do. For myself and two members of my team (Rufus Deuchler and Jason Levine), this moment came last week during our seminar stop in Seoul, Korea. Now, for the record, this was my 19th stop in Korea and I have always loved visiting this wonderful country. The people of Korea are some of the most friendly and welcoming people that I have ever met – not to mention that the country is absolutely beautiful, the cities clean, the food fantastic and (of course) the beer top-notch. From the moment I leave, I already begin to look forward to my next visit – and this time was no different.

I often tell stories of seminars past that I have had the pleasure to conduct in Korea, of the crowds, the enthusiasm for our products, and the professionalism with which my Korean colleagues arrange and execute them. And, in fact, I had mentioned to Jason several times leading up to the trip that he was in for a real treat – this being his first trip to Korea. Thankfully this time I wouldn’t need to fight jet-lag, as I was coming from Sydney and the WebDU conference – just a mere 12 hours in a plane and I’d be there!

The venue was once again the hotel Grand Intercontinental (the site of a very infamous story which will never get told in the blogosphere) – which is definitely on my list of favorite hotels in the world. After a day of preparation with our translators, we were well rested and ready for a day of evangelizing, and our Seoul friends did not disappoint! In fact, Min-Hyoung (our Korean Group Marketing Manager extraordinaire) had treated us to a wonderful Korean BBQ (one of my favorite foods) the night before, where he had expressed serious concern about the fact that they had been forced to close registration at 6000, due to the venue, which could only seat 2500. 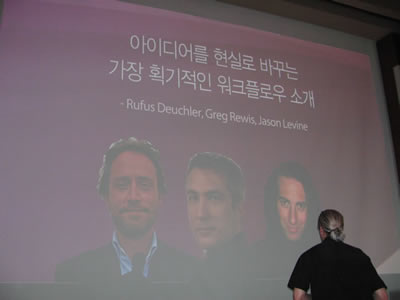 It’s so funny to see my old picture… pre-ponytail and goatee!

Dear reader, there is nothing that can excite an Adobe evangelist more than to tell us, not only is the venue huge, but we’ll be flirting with the fire code – with people literally sitting on the floor, in the aisles and standing (some of them did for 5 hours!) at the back of the room. Having told Jason what to expect, I was still smiling as he voiced his surprise at the size of the venue – and the throng of attendees waiting to get in when we arrived that morning. At the appointed start time, people were still filing in – so many that we had to postpone the start of the session by 15 minutes! As the lights came down and the opening intro (a really cool Flash piece that the Korean team put together) for our session began to play, there were some 2300 people seated and more than 200 standing/sitting in the aisles – with more still filtering in! How quickly 8 hours can pass… At the end of the day, after numerous autographs, photos, and huge smiles, we all agreed, “Ah, Korea, how I love you!” 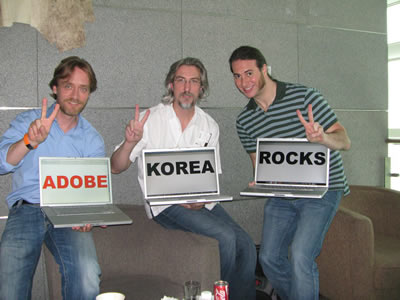 Our shout-out to the Adobe Korea team for a job well done!

I’ve got a few more pictures in my Flickr stream – along with pictures from our weekend in Beijing for those who are interested. And now, it’s off to Taiwan, and then on to Hong Kong… maybe I’ll see some of you there! Cheers!

9 Responses to “Thanks, Korea! Hello, Taipei and Hong Kong!”