Tossed in the garbage under Adobe, Assorted Garbage

Well, today is a day full of emotions and memories. Today, Adobe announced the end-of-life of GoLive. Effective immediately, we will no longer be developing or selling GoLive. Of course, for many longtime GoLive users, they have sensed and even stated to me that the writing was on the wall the day that Adobe acquired Macromedia. With a dominant marketshare in comparison to GoLive, Dreamweaver is the tool that, of the two, would emerge as the HTML authoring tool from Adobe.

But for me, it’s more than just simple bottom line arithmetic. GoLive will always have a very special place in my heart – even though I’ve been the primary Dreamweaver evangelist for almost 10 years now. You see, dear reader, I was present the day the first lines of code were written for the application that would become GoLive.

For me, it’s a journey that started in Hamburg, Germany in 1990. At the time, the internet wasn’t even on anyone’s radar (ours included). At the time, I was the Product Manager for a Hamburg-based software company known as P.INK. We built the first successful desktop-based publishing system for newspapers and magazines. Those were great times… as the publishing industry was in a state of transformation. And, with the transformation, many publishers quickly began looking for ways to repurpose this new digital content. Our own desire was a way to retrieve and digitally republish the content from our editorial database. 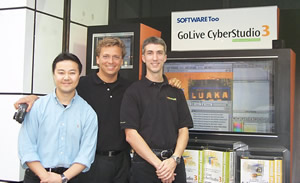 Thankfully, one of our engineers was still completing his college degree and had, in 1992, written a project using a new subset of SGML, known as HTML. The first beta versions of Mosiac had just began to make their way around the web, and we realized that this could possibly be the solution we’d been looking for. But, of course, newspaper and magazine layouts were (and still are) very different from a web page. So, we needed a way to format and layout the stories from the database… Hmm, things haven’t changed much since then…

Thus was born the P.INK Web Editor, released for testing to some of our clients, who, in turn, just stared at it – not realizing they were looking into the future.

After our parent company, who was dealing with their own financial troubles, decided to shut our doors, we were able to successfully acquire the rights to our “invention”. After securing funding for our new venture, named gonet communications and later renamed golive, we released the very first commercial web editor “Golive” in the fall of 1996. Yes, friends, we even beat PageMill to market. (Adobe had acquired Seneca – not sure of the spelling after all these years – earlier in ’96, but didn’t release it until a few months after our release.)

And with that release, the HTML editor wars began – but our renamed “Cyberstudio” quickly became the tool of choice for any Mac user building those early web sites. It was so successful that we were even approached by Adobe itself. Fortunately, or unfortunately – depending upon your point of view, those early negotiations were unsuccessful. It’d take another 18 months or so for the acquisition to become a reality. 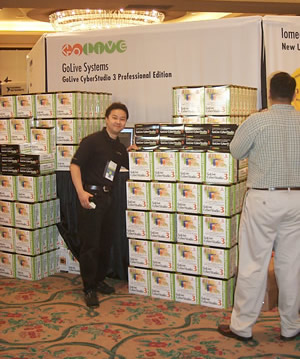 In the meantime, there were many, many good memories made and people met… Like the Worldwide Apple Sales Conference where we gave away a box of Cyberstudio to every Apple employee! Our friends at Macromedia were so taken aback by this that they even complained to Apple directly! Must have been frustrating for them to watch every Apple person walk by their booth with a copy of Cyberstudio in hand!

Or, how about the MacWorld where we put a dumpster on our booth! If you put a copy of any competing product in it, we’d give you a copy of Cyberstudio… Even we had no idea what a silly idea that was – or more correctly, how many times we’d have to empty that dumpster!

Of course, success breeds opportunities and change. For us, that came when Adobe came calling a second time at the end of 1998. Having failed to get a new version of Pagemill out the door, the stars aligned and we became Adobe. But for me, the change had an even bigger impact. After some very serious internal debate, I decided to leave Adobe for the greener (there’s a pun there if you look closely) pastures of Macromedia, where I helped begin to shape Dreamweaver – and in turn, attempt to kill GoLive. Am I the only one who sees the irony in all of this…? And btw, click either of the two pictures here to go to a set of more trips down memory lane in my Flickr stream.

Well, there’s been a lot of back-and-forth between the two camps over the years, some justified and some just poking fun. But in the end, I think that we can all be truly proud of what we accomplished. To those GoLive users out there, my heart goes out to you. It’s never easy to watch your favorite product reach this point. However, there are many of us still here at Adobe who worked on GoLive over the years, and who now are directly involved with making Dreamweaver an even better tool. Yes, there are still things in GoLive that we don’t (yet) have in Dreamweaver, but we’re eagerly working to fill those holes, while continuing to advance Dreamweaver with cutting-edge new features.

In fact, just last week, I had the extreme pleasure to “sneak” a few of those features at An Event Apart in New Orleans. To say that the audience was excited would be a gross understatement. I wish I could tell you about all the things we have planned, but that will have to wait a while.

Until then, I’ll look back on today with a tear in my eye… but also with a huge smile on my lips. In the words of my hometown, Laissez les bons temps rouler! There’s tons of web authoring goodness yet to come. Now raise your glass and let’s give one last toast to GoLive… Prost!